AMA Training  is offering the MDE exam at our training facility.  See Course Registration page for testing dates and times.

This course meets the refresher training requirements for the DC DOEE Mold Remediation Professional (Supervisor) discipline. It is targeted towards contractor supervisory personnel who provide oversight and management of microbial remediation projects. The course will cover the 24-hour DOEE course topics with emphasis on current relevant mold remediation industry work practices and standards.

This course is ideal for all maintenance and custodial staff.

This course meets the refresher training requirements for the DC DOEE Mold Assessment Professional discipline. It addresses the procedures, protocols, and equipment involved in inspecting and assessing a building for microbial growth. The course will cover the 24-hour DOEE course topics with emphasis on current relevant mold assessment industry work practices and standards.

This 2-hour awareness course will cover the following topics: Introduction to Mold, Health Concerns Due to Exposure, Growth Conditions, Mold Sources and Pathways, Building Systems (HVAC, Building materials, crawl spaces, attics, site drainage), Testing and Inspection Procedures, Remediation Techniques, Project Set Up, Equipment, Use of Biocides and Disinfectants and EPA Guidelines. An AMA certificate is provided for each student upon successful completion of the course.

This course is ideal for all maintenance and custodial staff.

On May 4, 2015, the Occupational Safety and Health Administration (OSHA) published 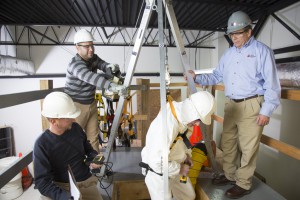 a final rule and new standard for construction work in confined spaces. 29 CFR 1926.1200 Subpart AA (Confined Spaces in Construction) is now aligned with those protections found in the General Industry standard. All construction employers, whose workers may be exposed to confined space hazards, are affected by the rule. Additionally, all employers must have a written confined space program if workers will enter permit spaces. The rule goes into effect August 5, 2015.

The U.S. Secretary of Labor, Thomas E. Perez, indicated in a statement that “[the rule] will prevent about 780 serious injuries every year”.

There are 5 key differences to the Construction Confined Space regulation:

OSHA has also added provisions to the Confined Spaces in Construction rule that clarify existing requirements in the General Industry Standard, including:

OSHA can assess a maximum penalty of $7,000 for each serious violation/failure to comply with the new rule and $70,000 for a willful or repeated violation.

On January 1, 2015, all Maryland residential rental dwelling units built prior to 1978 must be in compliance with Title 6, Subtitle 8 of the Environmental Article, Annotated Code of Maryland (Maryland’s “Lead Law”). Currently, compliance is required for residential rental dwelling units built prior to 1950. Affected properties that “opted out” of the previous requirement can no longer do so. According to the EPA, 24% of homes built between 1960 and 1978 are likely to contain lead-based paint.

In order to be in compliance, Owners of affected properties must:

Properties exempt from the Act:

Preparedness is defined by Webster’s Dictionary as “the fact of being ready for something; the state of being prepared”. Past issues of The Monitor have addressed many facets of preparedness, through disaster plans to preparedness in the home.

With this year’s Ebola outbreak in West Africa and the several cases that were recently treated in the United States, AMA feels compelled to share web links in order for our environmental, health and safety community to be better informed and better prepared in the event there is a rise in Ebola cases here in the United States.

The Centers for Disease Control and Prevention (CDC) and the Occupational Health and Safety Administration (OSHA) continue to update guidance documents on their websites. As researchers, scientists and medical professionals begin to learn more about this deadly virus, we can expect ongoing updates to practices and procedures for those protecting themselves from Ebola.

To keep up to date visit:

Remember: the better educated, informed and prepared an organization is for any type of crisis, the more effective that organization will be should a crisis occur.

This course is offered in English and Spanish.

This course meets the EPA refresher training requirements for persons performing renovations in pre-1978 housing and child-occupied facilities. Refresher training is required every 5 years. Students review lead-safe work practices and performing acceptance testing. AMA provides a certificate for each student upon successful completion of the course.

Click here to register for courses in Hanover, MD and Fairfax, VA:

The EPA recently announced enforcement actions to contractors found to be non-compliant with the EPA’s Lead Renovation, Repair and Painting (RRP) Rule. Settlements were reached between May 2013 and January 2014. There were seventeen (17) contractors that did not obtain the mandatory RRP certification prior to performing renovation activities on pre-1978 homes. Twenty-one (21) settlements were for violations dealing with contractors that did not follow required lead-safe work practices. Additionally, three (3) settlements involved general contractors failing to ensure that their subcontractors followed the RRP standards. The enforcement actions led to civil penalties in excess of $274,000.